Today people throughout the country tune in to MeTV via our 177 + affiliates covering over 96% of the country.

"Who's on First?" is believed to be available in as many as 20 versions, ranging from one minute to about 10 minutes. The team could time the routine at will, adding or deleting portions as needed for films, radio, or television. If they needed to fill four minutes, for example, Abbott and Costello would do four minutes' worth of the baseball bit. The longest version is seen in "The Actors' Home," an episode of their filmed TV series, in which "Who's on First?" constitutes the second half of the program.

Since 2005, MeTV has been providing our viewers the very best in timeless and memorable television favorites… iconic programs that rank among the most revered and beloved TV shows of all time. 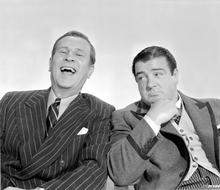